How do cryptocurrencies work?

Although cryptocurrencies (such as bitcoin) have been around since 2008, the hype surrounding virtual money only hit the mainstream this year. The main reason: the extreme rise in value and the associated media interest. Everyone is reporting on it, no matter whether ORF, Kronen Newspaper or Standard. More and more people are therefore asking themselves the following question: How do cryptocurrencies work?

In this article, we explain the technology behind cryptocurrencies and discuss whether it is still worth getting into the crypto business.

How do cryptocurrencies work?

Before you can understand cryptocurrencies, you have to look at a traditional currency, such as the euro. Money goes from one person to another in physical form - in printed bills or coins.

In contrast, there are cryptocurrencies. These exist only virtually and not in the real world. They are stored in a so-called "wallet".

Did you already know?
Besides software wallets, there are also online wallets (eg. Coinbase). These are a little easier to use because you don't need a program on your own PC and everything can be managed on a web page.

Why is Bitcoin so secure and how do transactions work?

For the following example we assume that Max to Otto 5 Bitcoins wants to send. We explain what happens during the transaction.

Summary:
Bitcoin is so secure because the blockchain is an open table. The more miners there are, the more secure Bitcoin is. Since there is no central location and anyone can download the blockchain table, transactions cannot be changed afterwards, as one would then have to have access to all mining computers worldwide.

We recommend this video to anyone who needs a more detailed explanation of Bitcoin. It also summarizes the role of the miners.

You too can Become a Miner. However, it is no longer profitable for private individuals today, as large companies have entire server farms working just for bitcoin.

Is the crypto business still worth it?

We believe that cryptocurrencies are still in their infancy. If we go by the world population, less than 10% of all people know about Bitcoin.

However, as the population increasingly loses trust in banks and financial institutions, interest is steadily increasing. More and more people want to be part of the crypto revolution.

Thanks to blockchain, you are not tied to any central place. Today, there are many Bitcoin miners around the world (tens of thousands). Therefore, turning off all mining computers at once or changing the blockchain is impossible (or extremely unlikely).

These and many other factors will therefore ensure that cryptocurrencies will continue to play a major role in the future. Since Bitcoin has already reached a very high price, you should also inform yourself about alternative currencies. The best-known alternatives include Ethereum, Ripple and IOTA. 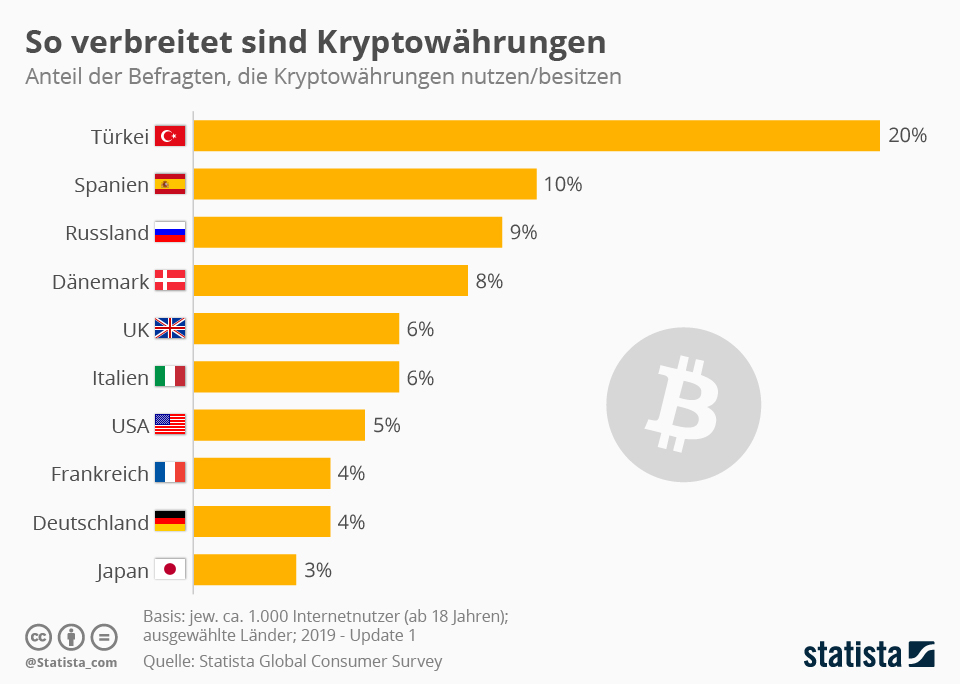 You can find more infographics at Statista

We have in this Article explains whether you can still make money with Bitcoins and other currencies.

You can find a table of all currencies for example at coinmarketcap.com!

If you still have a question about "How do cryptocurrencies work?", we recommend you check out the other posts in our Crypto Blog and a look at the official Wikipedia entry to the Bitcoin.